The Project The Investigation About Resources Join the Challenge

The Project The Investigation About Resources Join the Challenge

Hate messages are increasingly present in the online public discourse. At European level, equally worrying are the large number of reports which mention the fact that cyberhate is a persistent issue or a growing concern in certain countries. It is unclear whether this is a result of an actual increase in the amount of hateful content on the internet, or whether the problem is more noticeable owing to improvements in the monitoring and reporting mechanisms that are now in place. This is reflected in Cyberhate: an issue of continued concern for the Council of Europe's Anti-Racism Commission (2016).

As for global data, according to 2018 Hate Crime Data of ODIHR, there were 5.735 hate incidents reported to ODIHR by civil society, international organizations and the Holy See. The most frequent were anti-semitism and racism-xenophobia.

Furthermore, according to studies by the think tank Demos, on Twitter, there are approximately 10,000 tweets per day with racist insults in the English language, which is one in 15,000 tweets (Gagliar-done et al. 2014). Even though these sort of messages can be found in any environment, Internet and social media have granted anonymity to the hateful actors that hide in that virtual space.

NO MORE HATERS, a Fad and Maldita.es project supported by Google.org’s Impact Challenge program, was created to fight these messages. The goal is to reach 35.000 youngsters who are between the ages of 14 and 29 so that they are aware of the importance of generating responsible and hate-free conversations that are based on inclusion and respect. Why focus in the youth? Nearly half of all hate crimes that were registered in Spain in 2019 were carried out by offenders who were under 26.

With this project, Fad and Maldita.es will start an investigation that will come up with a diagnosis of the situation, which will be based on interviews with experts and online groups with teenagers and youngsters, as well as keeping track of social media to identify and analyze these sort of messages. 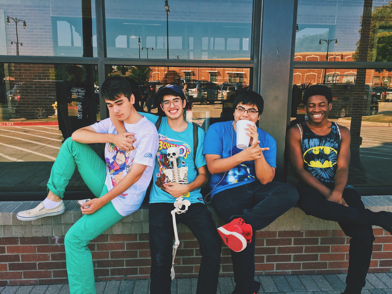 NO MORE HATERS also uses an app that will let teenagers and youngsters identify and report hate messages that they find online or in their closest environments. The goal is to get 15.000 secondary students and 20.000 young people who are under 29 to use the on a daily basis and to help them spot these kind of messages, a task that is not always easy. With a simple evaluation to be done before and after, alongside specific tests to learn how to resolve conflicts and generate alternative respect-based discourses, teenagers and youngsters will have the tools to challenge these situations.

In essence, the goal is to find solutions and to fight hate collectively with inclusive and integrating messages that encourage equality within a diverse society.

During the development of this project we will invite you to participate in the awareness campaign on social media. The aim of the digital campaign is to raise awareness on the importance of assuming individual responsibility when it comes to hate speech on social media.

Who is it for?

Hate messages are not exclusive to any age group, but if we look at the hate crimes registered in Spain in 2019, we will see that nearly half of the offenders were under 26, according to the Spanish Interior Ministry.

More than a quarter of the victims who suffered these hate crimes were under 26. That means that, parents, teachers and mediators have a very important role in supporting victims and helping them face these situations, specially in the case of minors.

NO MORE HATERS wants to provide tools to the victims and their close ones so that we can all neutralize these messages and toxic behaviours. We are only going to be able to stop hate by educating and identifying riskful situations, as well as encouraging more inclusive and equal conversations that respect human rights.